"The Ohio University" is the oldest college in the state, founded on February 18, 1804. The University opened in 1808 with one building, three students, and one professor, Jacob Lindley. In 1828, Ohio University conferred an A.B. degree on John Newton Templeton, its first black graduate and only the third black man to graduate from college in the U.S. 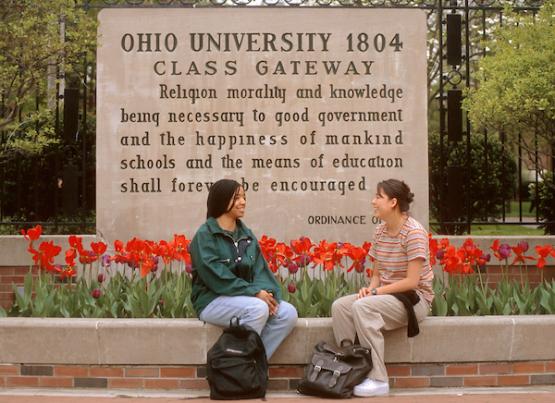 The College Green is the center of the Athens campus where three of the University's oldest buildings are located. Cutler, McGuffey, and Wilson halls date from the 19th century.

It's also the heart of the campus, where students gather with friends under shady elm trees. The College Green is the site of some of OHIO's most treasured landmarks: the Alumni Class Gateway facing Uptown Athens; Templeton-Blackburn Memorial Auditorium; and the Kissing Circle, a bronze plaque near Chubb Hall that inspires fond memories for many alumni. Students in cap and gown often take advantage of the newly refurbished Class Gateway on the north side of the Green to commemorate their graduation.

Please request application information regarding admission as a student using the form below.

Check Us Out on Social Media

Ready to Take the Next Step