Ohio University has been cited for academic quality and value by such publications as U.S. News and World Report, America's 100 Best College Buys, Princeton Review's Best Colleges, and Peterson's Guide to Competitive Colleges. Here are a few of our highly ranked programs:

OHIO’s Honors Tutorial College (HTC) is one of a kind: the only degree-granting tutorial college in the United States. HTC patterns its teaching approach after the centuries-old tutorial system used at Oxford and Cambridge universities in Great Britain. In the past four years alone, more than 18 published works have resulted from collaborations between HTC students and faculty.

The John Templeton Foundation has recognized Ohio University as one of the top character-building institutions in the country. Currently, Ohio University ranks among the top in the state of Ohio for nationally competitive awards won by its students.

Ohio University’s Career and Leadership Development Center (CLDC) has been recognized for career services excellence by the National Association for Colleges and Employers (NACE). Just this year, the CLDC greatly expanded its online network of job and internship opportunities with access to thousands of employers in the Handshake platform. 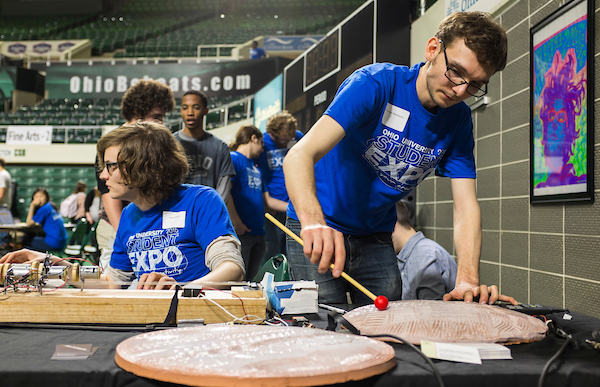 OHIO is recognized as a leader in research and innovation and received a Designated Doctoral University - High Research Activity classification from the Carnegie Foundation, signaling its place among the top 5% of USA universities. Annual research expenditures at OHIO topped $62 million in the past fiscal year.

EAB Global named Ohio University one of six innovative colleges to watch in 2019. EAB's list was based on a Chronicle of Higher Education Series that drew attention to OHIO's Academic Innovation Accelerator, which provides resources and financial support for piloting ideas to pursue innovation in teaching.

OHIO was also ranked in the Top 10 universities in the USA in 2016 for its ability to commercialize its extensive research discoveries. The university prioritizes innovation and creativity in all programs and launched an institution-wide Innovation Strategy in 2015. The program has awarded millions of dollars to new, innovative projects from students and faculty. The OHIO Innovation Center, one of the first university-based business incubators and technology commercialization centers in the USA, was ranked the 3rd best university business incubator in USA in 2016 by UBI Global.

OHIO provides faculty and facilities on the forefront of science and technology, including the Edison Biotechnology Institute, Edwards Accelerator Lab, the Diabetes Institute, and the only avionics engineering center in the U.S.

Creative expression is showcased at OHIO through the world-class Kennedy Museum of Art as well as the Ohio University Art Gallery, Trisolini Gallery, Cube 4 Gallery for students, CREATE_Space, and Athens Center for Film and Video. The Game Research and Immersive Design (GRID) Lab gives students the ability to research and learn new skills in interactive digital media, such as educational games, simulations, computer animation, and virtual reality.

For students who aspire to create their own business, OHIO’s Center for Entrepreneurship was named the Best Emerging Entrepreneurship Program in the USA by the U.S. Association for Small Business, and for students considering careers in science, researchers at OHIO’s Edison Biotechnology Institute discovered a drug that has gone on to generate global sales of $230 million.

Please request application information regarding admission as a student using the form below.

Check Us Out on Social Media

Ready to Take the Next Step