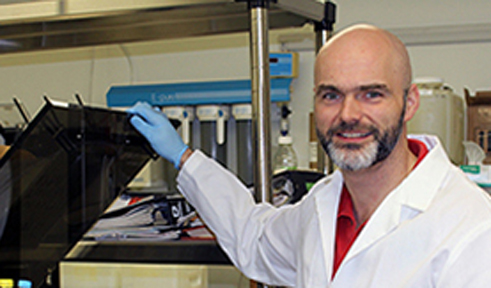 Research in my laboratory is focused on exploring the mechanisms that allow Staphylococcus aureus to cause disease in humans. Infections caused by S. aureus, and in particular those caused by the highly drug resistant form, methicillin resistant S. aureus (MRSA), are a growing problem in the United States, and very few antibiotics remain effective in treating diseases caused by this bacteria. Understanding the pathogenesis of S. aureus is critical to aid the development of effective vaccines and treatments. The human bloodstream represents an important in vivo environment, which S. aureus uses to disseminate throughout the body. Using state-of-the-art next generation DNA sequencing techniques I am exploring novel regulatory mechanisms that influence S. aureus virulence gene expression during growth in human serum. Work in my laboratory also examines the secretion of toxins and virulence factors by S. aureus, a process that is critical for the bacteria to cause disease. Research in my lab employs a wide variety of microbiology and molecular biology techniques and represents an ideal environment for undergraduates with a keen interest in microbiology research to gain hands on, practical experience.

I received my undergraduate degree in Microbiology from Trinity College Dublin (Ireland) in 1999 and the same year began my Ph.D. research in the laboratory of Charles Dorman. For my Ph.D. I studied the regulation of virulence gene expression by nucleoid-associated proteins in Salmonella typhimurium. I moved to the United States in 2004 to begin a postdoc at the University of Illinois at Chicago, in the laboratory of Linda Kenny, where I continued to study gene regulation in S. typhimurium, focusing on bacterial two component signal transduction systems. In 2008 I moved to Houston, TX, to begin a postdoc in James Musser's lab at The Methodist Hospital Research Institute (TMHRI). The focus of my research at TMHRI was genomic and transcriptomic analyses of the Gram-positive pathogen Streptococcus pyogenes. I left Houston in 2010 and later that year I moved to Tampa, FL, to begin working at the University of South Florida (USF) in the laboratory of Lindsey Shaw. At USF I studied the role of exopeptidases in Staphylococcus aureus and conducted a variety of genomic, transcriptomic and metagenomic projects using next-generation DNA sequencing.